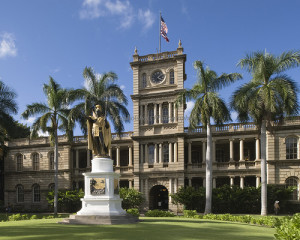 A view of Aliiolani Hale (Aliʻiōlani Hale in Hawaiian) in Honolulu, Hawaii. Originally intended as a palace for King Kamehameha V, the Italian Renaissance Revival structure, designed by Thomas Rowe and dedicated in 1874, was instead commissioned as an office building for the growing Hawaiian government. For most of the next two decades, Aliiolani Hale hosted the Hawaiian legislature, courts and many executive offices. After the establishment of the Republic of Hawaii in 1894, the legislature and some other offices relocated to Iolani Palace, at which point Aliiolani Hale became primarily a judicial building.

Over the years, the building hosted many levels of the Hawaiian judiciary, including state, district, family and circuit courts. By the 1960s, though, Aliiolani Hale had grown too cramped for those multiple layers of the judicial system, and the building was remodeled for its present use as home of the Hawaii Supreme Court and related offices while other judicial functions relocated to other buildings.

In the foreground stands a statue of King Kamehameha I, sculpted by Thomas R. Gould in 1883.

Aliiolani Hale is listed on the National Register of Historic Places.